​In a Berlin nightclub, as the 1920's draw to a close, a garish Master of Ceremonies welcomes the audience and assures them they will forget all their troubles at the Cabaret. With the Emcee's bawdy songs as wry commentary, Cabaret explores the dark, heady, and tumultuous life of Berlin's natives and expatriates as Germany slowly yields to the emerging Third Reich. Cliff, a young American writer newly arrived in Berlin, is immediately taken with English singer Sally Bowles. Meanwhile, Fräulein Schneider, proprietor of Cliff and Sally's boarding house, tentatively begins a romance with Herr Schultz, a mild-mannered fruit seller who happens to be Jewish. 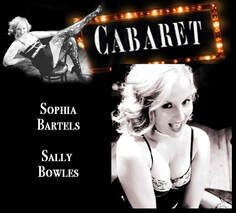 Sophia is ecstatic to be returning to the Forst Inn, this time on the stage! Last year she was in the pub for Picaso at the Lapin Agile, and has previously been on the CCC stage for Masquers productions of Mamma Mia (Tanya) and A Chorus Line (Val). For the last 20 years it has been a dream of hers to play Sally Bowles, and she is so thankful for the support of her loving husband and daughter to help make that dream come true. So sit back and enjoy the cabaret old chum! 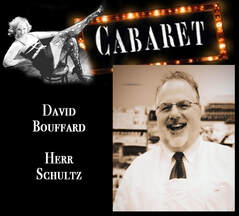 This is Davids first foray into the Forst Inn theater family. He began his theatrical journey as a 10 year old because he was dragged to Peter Quince Perf Company rehearsal when his older sister had to babysit. If there was a solid colored set piece, David painted it. He stayed active on, stage and off, with PQPC for more than a decade. He has also done 7 shows with Masquers. While out west for 30 years he stayed active whenever possible. Most recently in 4 show with Powder River Playhouse in Gillette, WY. Pulitzer in Newsies being his favorite. "Now sit back and enjoy the show"​ 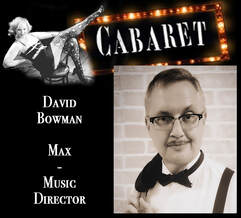 Frequently involved in local theatrical productions in varying capacities, David is happy to be wearing three (possibly four) different hats for this production. He is serving as the music director, playing the pit piano and acting as Max. The work ethic of this cast is outstanding and they have risen to the challenge of setting aside vocal perfection (whatever that means) in pursuit of the gritty, raw emotion that this dark show so richly deserves. Enjoy... and remember to stand up when needed. 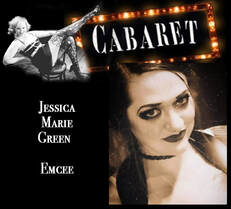 Jessica Marie Green is pleased to be your Emcee for the evening. Hailing from Gibson WI, Jessica has lived and traveled all over the US in her youth before coming back home to the Lakeshore. A performer as soon as she could talk, some of her favorite roles have been; Gymnasia in ...Forum, Morgan LeFay in Camelot, and Dance Captain/Ensamble in Mary Poppins. Jessica is most excited to be not only be performing her dream role of The Emcee, but also sharing the stage her sister Melissa for the first time.  She would like to thank her parents, sisters, Lucky Dog, and The Wildflowers for their love, support, and encouragement. Now, sit back, relax, and Wilkommen to the Kit Kat Klub! 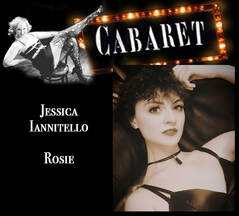 Jessica is delighted to be taking part in her second show with the Forst Inn, having previously appeared as Snug in Midsummer Night’s Dream. She has been involved in over 40 theatrical productions with different area companies, with highlights including performing as Helen Keller in Masquer’s “The Miracle Worker”, Babette in Treehouse Theater’s “Beauty and the Beast”, and directing Peter Quince Performing Company’s “All Shook Up”. A fun fact about Jessica is that although she has never been to Berlin herself, she has a piece of the Berlin Wall in her possession. She hopes you enjoy your stay at the Kit Kat Klub as much as she has. Prosit! 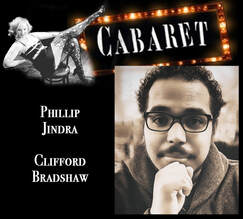 Phillip is thrilled to have the opportunity to play Cliff tonight. This is both the most lines and least music he's ever had to learn for a musical. You may have recently seen Phillip playing the one eyed preacher Phineas Wingfield in Anatomy of Gray. Next up after Cabaret, you can check out Phillip as Stokes in Carrie, opening in October, and then Mistletoe Musings in December, here at the Forst. Phillip is happy to be sharing the stage tonight with his wife Tessa and friends. Enjoy the show! 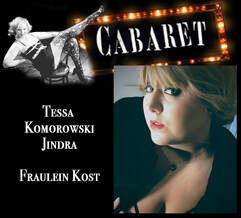 ​Tessa Komorowski is from the Manitowoc WI area and has been involved in many productions with Peter Quince Performing Company, Masquers, UW Manitowoc, and The Forst Inn. Some of Tessa's favorite roles include “Bakers Wife" In Into the Woods, “Rosie" in Mamma Mia, “Drowsy” in The Drowsy Chaperone, and "Alison Bechdel" in Fun Home. Tessa has Choral directed, Choreographed, Directed, and Stage Managed/Tech directed along with a bunch of other wonderful opportunities. Tessa is excited to take on a new role and share the stage with her Husband Phillip and a talented cast of humans. 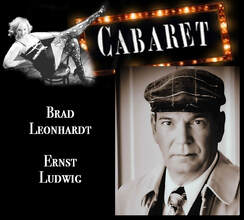 ​Brad Leonhardt performs throughout Wisconsin and is elated to be part of a Forst Inn show working with director Lisa Heili.  Some of his previous favorite roles are:
Friar Laurence in Romeo and Juliet; the French Taunter, Black Knight, and others in Spamalot; Mal Beineke in The Addam’s family; Colonel Mustard in Clue the Musical; Marley in A Lyrical Christmas Carol. Brad also performs for Dinner Detective in Green Bay. His last show was also Cabaret with Attic theatre. Brad enjoys restoring old houses.  His current project is an 1870’s brick Italianate.  Brad just completed filming in his first feature film Through Eyes of Grace, scheduled for release in 2023. 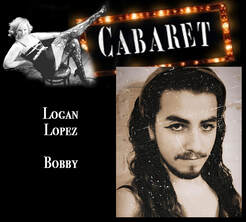 Logan is a lively young man who has a passion for theater and acting. Logan has been involved in theater since High School. He has starred in shows like Calamity Jane and A Tale of Two Cities. Logan also played Erik in The Phantom of the Opera, Robert in The Masquers' Boeing Boeing and his most recent activity was in Peter Quince's Big Fish as Amos Calloway. In his free time, Logan finds joy in video games, playing D&D, growing his hair, and having fun with friends. 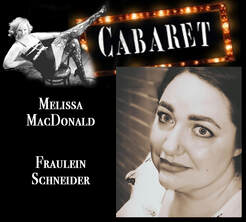 A native of the Manitowoc area, Melissa has been involved in theatre in some capacity for most of her life. After a decade or so behind the scenes, she is ecstatic to be returning to stage as part of an immensely talented cast. She is especially excited for the opportunity to share the stage with her sister, Jessica, for the first time, and grateful that Jes talked her into auditioning! Melissa would like to thank her family and friends, especially her daughter Maggie and husband Jason, for all their love and support. Welcome to Berlin! 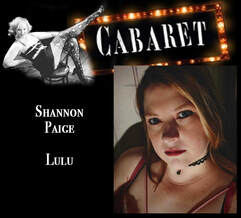 Shannon is hopping onto the inn stage again for her 2nd time this season after playing a Wall in Midsummer. Some of her favorite roles have included Jack's Mother in Into the Woods, Jenny in Company, Logaine in 25th Annual Putnum County Spelling Bee, and Jeri Neal in The Dixie Swimclub. She is a proud OG member the Mistletoe Musings which is going on year 6 this December. Here at the inn she also enjoys running the booth, as well her house manager duties. Enjoy the show and the cheesecake! ​ 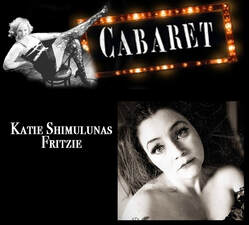 This is Katie's 1st official show at the Inn. And she has been waiting for the chance to bring Cabaret back to the area. She has been on stage with other companies including Peter Quince, Masquers, and UW Manitowoc.  As much as Katie enjoys being on stage, she really enjoys the challenge of choreographing musical theater and has helped choreograph for Peter Quince, Masquers, Treehouse Theater, and Appleton East High school. Cabaret has to be one of her favorites. The unique venue made a perfect place to present Cabaret. The dedicated cast has worked through injuries and gave literal blood sweat and tears to bring  this dream to life. 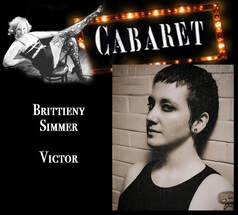 Brittieny is honored to be returning to the The Forst Inn stage for Cabaret. They're a klutz and dancing is hard. You may have recently seen Britt on The Forst Inn stage as Philostrate in A Midsummer Night's Dream or as Joan in Fun Home. Be sure to catch them again in Carrie: The Musical in October. Britt spends free time with their boyfriend, Andrew, and dog, Lacy. Like Victor, they have a fundamental opposition to pants. 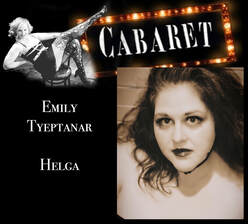 Emily is so excited to be a part of Cabaret.  This is her first show at The Forst Inn and she’s so excited to be back on stage.  Emily is a Manitowoc native and has a Bachelors  degree in choral and general music education from Silver Lake College. She also plays tenor saxophone, flute and piano, and has been a featured soloist with the Lakeshore Wind Ensemble and Manitowoc Symphony Orchestra.  Emily has also performed with Masquers. When she’s not performing, she is a busy mom to her two little boys, Henry and Charlie. Emily is thankful for her husband, Michael, and for all her family and friends who have held down the fort at home so she could go to rehearsals and perform on stage again.
Orchestra
​Reeds: Kristy Woller/Dennis Kosloski
Trumpet: Chris Woller/Tim James
Trombone: Brian VanElls
Bass: Noah Ireland
Drums: Garrett Leigh/Jonel Ramirez