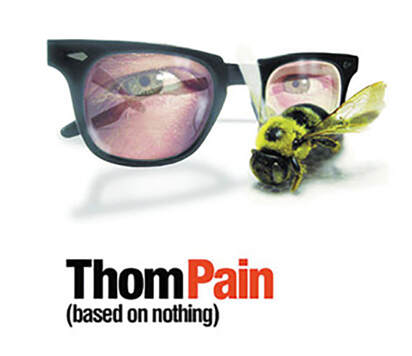 The play concerns the life of a tragic and funny character named Thom, who has been described as, “just like you, except worse. He is trying to save his life, to save your life—in that order. In his quest for salvation, he'll stop at nothing, be distracted by nothing, except maybe a piece of lint, or the woman in the second row.”
“Mr. Eno might be called a Samuel Beckett for the Jon Stewart generation ... To sum up the more or less indescribable: Thom Pain is at bottom a surreal meditation on the empty promises life makes, the way experience never lives up to the weird and awesome fact of being. But it is also, in its odd, bewitching beauty, an affirmation of life's worth.” - The New York Times
The play received enthusiastic reviews.
The Theatre Journal wrote: "Why did this production receive some of the strongest reviews of the season and a twice-extended run in the heart of New York City? The production aesthetics seem to work against popularity."
David Gritten of the Telegraph wrote, "It's hard to imagine more dazzling writing on any stage in Edinburgh this year."
Charles Isherwood, in his review for The New York Times wrote: "It's one of those treasured nights in the theater - treasured nights anywhere, for that matter - that can leave you both breathless with exhilaration and, depending on your sensitivity to meditations on the bleak and beautiful mysteries of human experience, in a puddle of tears. Also in stitches, here and there. Speechless, in any case."
The Theatremania.com critic wrote:
"At its conclusion, audience members may not know exactly what they just saw or what it was supposed to mean. Is Thom Pain a meditation on disappointment? An exercise in futility? Perhaps both. One thing is certain, however. Even if the piece is based on nothing, as its subtitle proclaims, its unconventional style makes it far more interesting than many other plays that are currently on the boards."
Ten years after the original production, Lyn Gardner of the Guardian wrote, "it's still one of the best monologues I've ever seen"